A Foray into Square Foot Gardening and Repurposing the Old

Square foot gardening (SFG) is a concept so simple that I almost ended up paying it no attention. Until now. And even now I seem to have arrived at it in a roundabout way- from my desire to own a raised bed (as  some of you know from the Facebook page) to the admission that until I can find a reasonable quote, I will just have to repurpose the old rectangular containers as best as I can. More about that in a second.

So what is SFG? A concept pioneered by Mel Bartholomew back in the 80s, it divides growing space into square measuring a foot each- so for example a typical 8' x 4' raised bed will have 32 squares to grow plants in.  In general, small vegetables such as Swiss Chard can be planted 4 to a square, onions 9 to a square, while big plants such as tomatoes and eggplants will take 1 or 2 squares. Mainly aimed at food growers with limited space, it maximises space usage and minimises the effort of digging, weeding, hilling and trenching and whatever else you have to do with typical row planting. This is how a typical SFG raised bed looks: 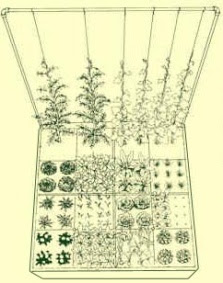 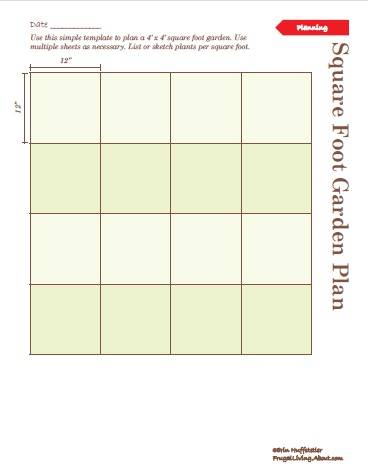 Since a couple of local carpenters here in Dubai quoted the enormous sum of Dhs 700 for a raised bed (8' x 4'), I have decided to forget about it for now. Instead, I got creative and rearranged my 9 rectangular planters to look like a raised bed. Each measures 3' x 1'. So in total, I have roughly 27 sq ft of growing space. This looks like a lot more space to grow food in compared to when the containers were arranged in a long row! 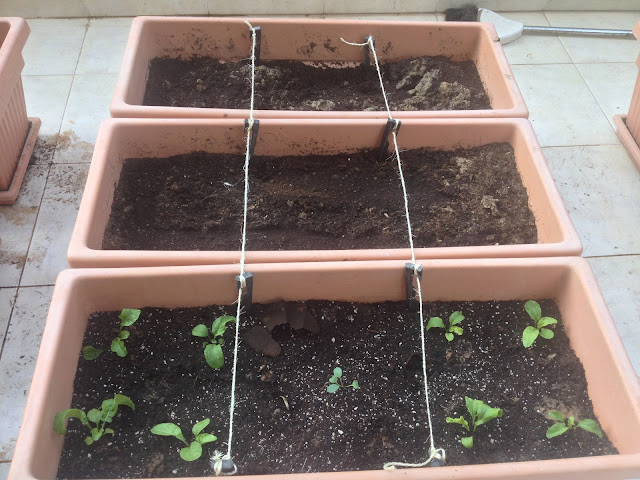 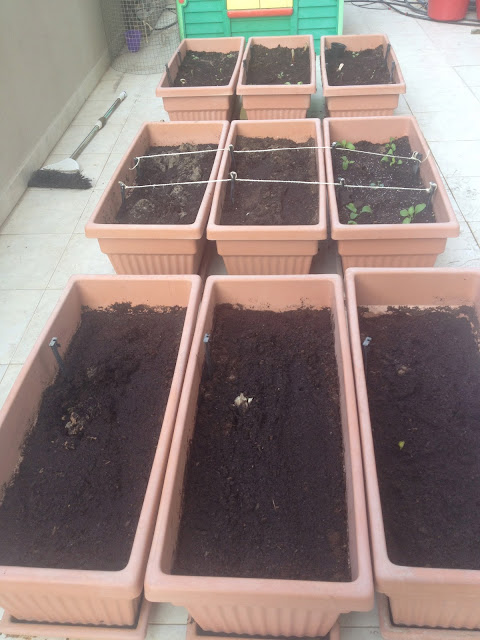 Alot of information is available about the type of plant and how many of it can go into one square foot. This takes some of the pain out of wondering about spacing in containers. I have decided to use my square foot garden to grow herbs, greens and some of the root vegetables. Black Kale and Russian Red Kale transplants are already in along with Swiss Chard and Golden Chard. Rocket is growing fast, the lettuce has been sown. I have yet to plant spinach, carrots, radish (long red and round yellow), opal basil and hopefully a couple of nasturtiums.


Here's the spacing I used:

And much more hopefully!

Growing Basil- An Edible View from the Window

Basil has to be one of the easiest herbs to grow and a very versatile one too- I just had some for breakfast with rice cakes, humus and black sesame seeds. And I snipped it from right outside my living room window too. My edible window view is well on its way. The basil seedlings that I picked up from Dubai Garden Centre are thriving. Here's a few tips for growing fragrant, glossy basil plants in pots on your patio. 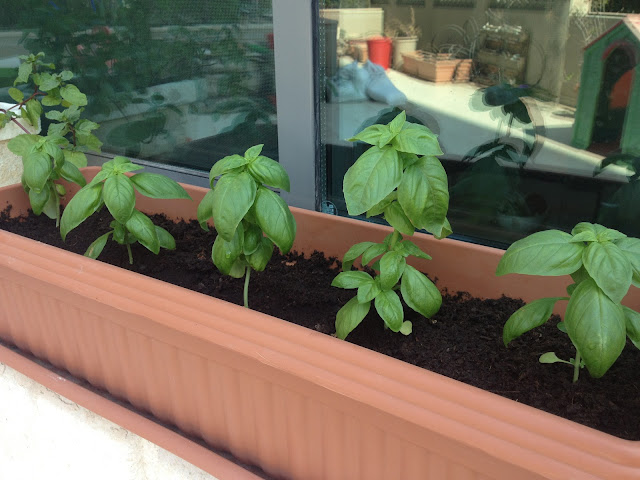 Most common leaf problems such as brown/black spots are caused by over- or under-watering and water splashing onto the leaves that can transport soil-borne fungal and bacterial diseases to the plant. Also, water droplets on the leaves in hot sun is not a good idea as it can burn the leaves.If you spot browning on your leaves, the first thing is to check your watering and location of plant. Too much sun here can usually cause leaf edges to curl and brown. Move it around a bit to see what helps.

Natural Pest Control from the Kitchen: 5 Recipes to Defend Your Plants

Natural pest control can be as simple as using items from your kitchen to rid your beloved plants of undesirable critters. However, before you try any of the recipes for homemade pesticides, keep a few important points in mind.

How Many Ways Can You Use a Coconut?

For me, coconut trees evoke the memory of the street I grew up on- a quiet place lined with palm trees rising tall in front of the modest villas. The gardens where these trees grew were well-tended, layered with the colours and smells of bougainvillea, morning glory, frangipani, jasmine, periwinkle, Rangoon creeper and other plants. Yet, I was living in no tropical paradise.

Beyond the soothing whispers of the palms, beyond the street security barrier manned by a burly chowkidar, there was always the sheer press of Karachi’s teeming crowds, ethnic clashes, political instability, the bang and shatter of gunfire, regular news of bombs and bodies dumped in bags. Although we were cocooned in relative peace, the times were tainted with confusion, turbulence and often fear, as indeed they are today. In those days, the coconut palms dotting the violent landscape of my city came to signify a particularly defiant strain of grace and beauty for me. 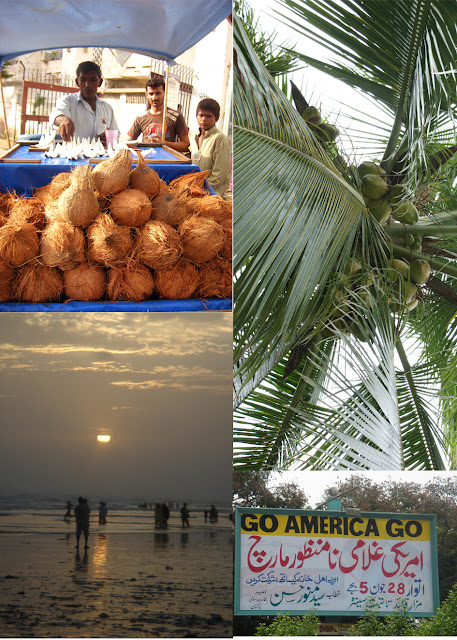 Nature knew what it was doing when it gave red cabbage its gorgeous, glossy colour. These days I cannot seem to return from the supermarket without a piece of this locally grown, beautiful and nutritious vegetable in the bag. The colour alone, both raw and cooked warrants the amount of red cabbage we seem to be consuming in soups and hearty salads on these mild middle eastern winter days. And of course, the deep deep red pigment also reflects a superb nutrition profile- a high concentration of phytonutrients and a number of anti-inflammatory and antioxidant benefits. 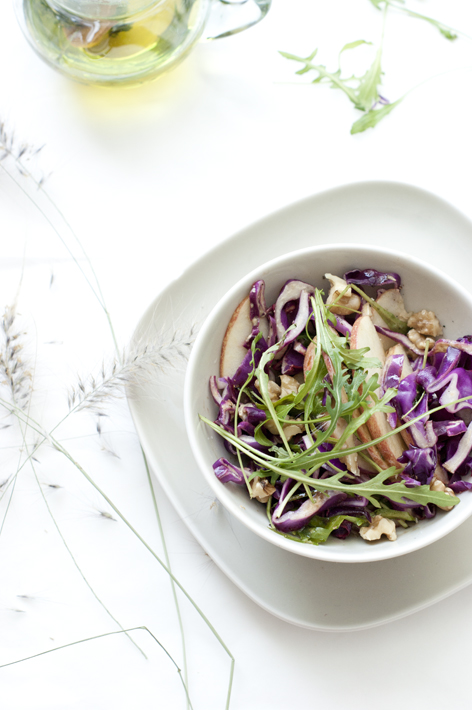 I have been reading Michael Pollan's book In Defence of Food and what a brilliant read it is! With his unique perspective on food, society and health, Pollan strives to free us from the clutches of 'nutritionism'- the modern trend of breaking every single food down to its individual nutrients.

Cooking with Dill and other things from the garden

Going back to Karachi always does this to me. It's almost traumatic- especially the return. Not so much because I miss my family- indeed three weeks of pure wedding can be a family dose large enough to last a long while- no, it's more like a massive drain of energy so that I come back virtually juiced out. That faced with the husband travelling a bit too often for work, start of school for Sara and the blustery weather that I didn't quite know what to make of. So come evening, I would crash in front of the telly with my dinner while the wind howled through the trees outside. 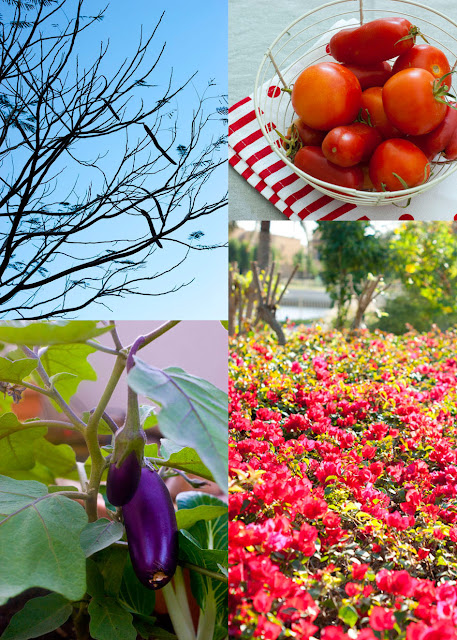 Last year, we had mixed luck with the runner beans we planted. This year, we are full of beans!

We are growing the Blue Lake Pole variety and they are coming along like a dream. Magic beans, indeed. And they have to be picked first thing in the lovely cool of the morning, in panda bear pjs. That's half the fun. The other half is a bean brunch- garden fresh beans stir fried in a bit of olive oil, garlic and sea salt. The girls eat them like chips and have coined their own term for it- 'chip-beans'. Whatever it takes to get the greens in, I am not complaining! 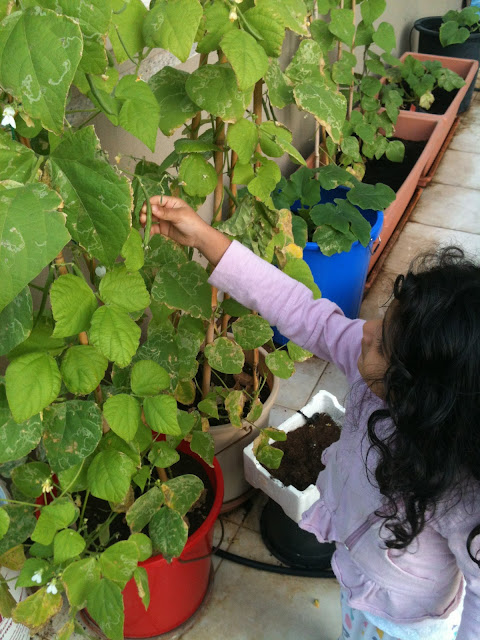 In cities around the world, people are getting creative with growing food in urban spaces- window boxes, empty lots, roofs, patios, in old tyres and kitchen sinks, drainpipes and waste bins. And they are finding out what we found when we first started growing food on our terrace in Dubai- not having a green thumb or lots of space is no longer an excuse. Just get a few basics right, throw in some seeds and watch it happen. Of course, be ready to lug bags of soil, muck around with manure and beg your plants not to let you down!